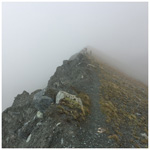 Introduction to the special issue of Geographica Helvetica: “Different approaches to landform monitoring”

In times of rapid climate change and related landform modifications at increasing rates, reliable long-term monitoring data with high spatiotemporal resolution are needed for thorough sensitivity assessments. However, only limited data to quantify and analyze landform changes and related processes at the timescale of decades are available. In Switzerland, several long-term monitoring programs exist, but primarily focusing on climate variables. Nevertheless, such programs partly secure the consistent and systematic observation of landforms, e.g., rock glaciers. Such programs are substantially funded by governmental authorities and performed by different institutions. Fundamental research can also contribute to the monitoring of landforms on the basis of scientific projects, as we can see from the contributions in this volume or similar earlier contributions to the topic (e.g., Lane et al., 1998). Such projects often cover shorter time periods and smaller areas but still provide useful data as reference to describe environmental changes and provide in-depth understanding of geomorphological processes. Different methodological approaches allow for reconstructions of certain landform conditions, the documentation of current landform changes for large regions or with high temporal resolution, or the analysis and simplification of processes under controlled conditions in the laboratory, as shown in this special issue (Gärtner-Roer et al., 2019).

The papers published in this special issue of Geographica Helvetica were presented at the biannual meeting of the Swiss Geomorphological Society (SGS, http://www.geomorphology.ch, last access: 4 June 2020) in Zermatt, Switzerland, in August 2017; get an impression of the excursion in Fig. 1. This meeting had the focus topic “Glacial Geomorphology” and was attended by more than 30 people, mainly young geomorphologists. A vivid discussion on new monitoring approaches, for example by repeated satellite or UAV (unmanned aerial vehicle) surveys, was held at this occasion. Therefore, the paper collection in this special issue of Geographica Helvetica is entitled “Different approaches to landform monitoring”. Most of the studies focus on high-mountain processes and landforms, such as moraines, glaciers, rock glaciers, landslides, and torrents, as related to the geomorphology of Switzerland (Reynard, 2020). As in former SGS publications (e.g., Greenwood et al., 2015), this format of a paper collection is very attractive for geomorphologists in Switzerland and Europe, as well as for interested laypersons.

In the study by Boxleitner et al. (2018) entitled “Piecing together the Lateglacial advance phases of the Reussgletscher (central Swiss Alps)”, exposure dating methods have been applied to investigate the development of the Reussgletscher after the Last Glacial Maximum. They were successful in the dating of moraines accumulated prior to the Younger Dryas, with the oldest samples predating the Bølling–Allerød interstadial (>14.6 ka). Besides their success, they also describe the challenges in sampling these old moraines, where datable boulders are rarely preserved.

Burkhalter et al. (2019) investigated the activity of a landslide on the edge of Lake Lucerne by means of dendrogeomorphology. In their study, “Reconstruction and actual trends of landslide activities in Bruust–Haltiwald, Horw, canton of Lucerne”, they sampled trees growing on landslide-affected slope and described spatiotemporal movement patterns, based on the analysis of growth reactions in the trees. The results indicate that the area has been moving since 1948 and shows more activity between the years 1990 and 2000 as well as after 2006.

In the paper, “Glacial lake outburst flood hazard assessment by satellite Earth observation in the Himalayas (Chomolhari area, Bhutan)”, Scapozza et al. (2019) present a case study and a numerical modeling for the supraglacial and ice-contact lakes on Thangothang Chhu glacier, Chomolhari area (Bhutan). Detailed geomorphological mapping, including landslide and rock glacier inventories, as well as surface displacement determination using an interferometric synthetic aperture radar (InSAR) satellite, allowed a glacial lake outburst flood hazard assessment for the lake Wa-007 to be performed. The modeling of different scenarios using r.damflood allows the quantification of wave-front arrival time, the maximum water depth, and the arrival time of maximum water height for the two human settlements. Additionally, the authors propose developing a long-term monitoring strategy based entirely on satellite Earth observation data, with an update cycle of 5 years to assess the future evolution of the area.

Vivero and Lambiel (2019) highlight the increasing use of UAV devices in recent times. In their paper, “Monitoring the crisis of a rock glacier with repeated UAV surveys”, they investigate a destabilized rock glacier, situated in steep and hazardous terrain and therefore not directly accessible. Over 2 years, repeated aerial surveys allowed the quantification of elevation and volumetric changes of the landform. Between June 2016 and September 2017, the destabilized part of the rock glacier advanced up to 60–75 m and mobilized a volume of around 27 000 m3 of material which was dumped over the lower talus slope. 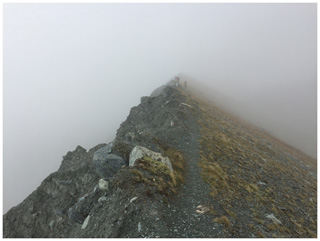 Figure 1Geomorphologists in the fog on the Little Ice Age moraine of Findelgletscher, Zermatt (taken in August 2017, during the excursion of the SGS meeting; I. Gärtner-Roer).

In their study, “Regional-scale inventory of periglacial moving landforms connected to the torrential network system”, Kummert and Delaloye (2018) describe a new methodology developed to identify and characterize moving landforms connected to the torrential network system at a regional scale and present the results yielded from the application of this method in a region in the southwestern Swiss Alps. They analyze simple data such as those from a high-resolution digital elevation model (DEM), time series of aerial images, and a slope movement inventory. They found that such types of sedimentary connection appeared to be rather rare and are characterized by relatively low sediment transfer rates. Nevertheless, several sites were identified as transferring large amounts of sediment into the torrents due to the change of the kinematic behavior of the landforms and in regard to the evolution of the surface velocities, which are currently and for certain locations generally increasing in the European Alps.

Fister et al. (2019) present in their paper “Testing of photogrammetry for differentiation of soil organic carbon and biochar in sandy substrates” a method developed and tested in a lab environment. The study proves that photogrammetry, which is noncontact and noninvasive, is able to quantify erosion rates and can be used to differentiate between organic and inorganic material, while other methods involve extensive sampling campaigns that disturb the processes themselves. Erosion of biochar was estimated and compared to the actual erosion amount that was transported along the plot. It was tested under highly controlled conditions in a bottom-up experimental rainfall simulation setup, conducted with sieved sand substrates of very narrow particle size distribution by using two-dimensional index and reflectance maps of the surface computed with the software Pix4D. For future investigations, the authors recommend the improvement of the lighting of the plot, as well as full exclusion of external light, which means working in the dark, and the use of hyperspectral cameras to detect different carbon types.

All the contributions in this special issue nicely show that individual projects can provide important insight into ongoing landform changes and thus contribute to long-term process understanding. Therefore we highly encourage new projects to address key issues in the geomorphological sciences by exploiting these and many other emergent developments, including new modeling approaches, novel monitoring technologies, and robust datasets collected at the “right” timescales and space scales. In addition, we motivate geomorphologists to become more actively involved in the process of long-term monitoring of landforms.