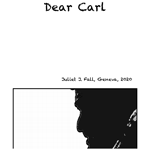 As I watched clips of the statue of the 17th century slave trader Edward Colston be thrown into the water in Bristol, UK, I could not help feeling pleased that some sort of poetic and visual justice was being served: a statue of a man thrown into the same ocean his ships had sailed across while carrying vulnerable bodies. At the same time, I knew that I worked, in Switzerland, in a glass-fronted building inaugurated as Uni Carl Vogt in 2015. It is named after a 19th century scientist and politician who lived in Geneva and who dabbled enthusiastically in racial theories. He is conveniently remembered locally as a progressive who helped found the university as a lay institution, rather than for his shameful published views on racial inequality.

As other statues fell around the world and debates were reopened around the physical presence in cities of past figures associated with colonialism, slavery and racism, I reflected on what these inescapable daily presences amongst us might mean. Switzerland has long thought of itself as innocent of colonial crimes since it did not directly participate in claiming and administering territories elsewhere. Yet scholars have productively revealed this to be a fallacious and self-serving narrative (Michel, 2015; Purtschert and Fisher-Tiné, 2015; Boulila, 2019) both in the past and in the present. Instead, as monuments topple and public spaces are renamed, much-needed national discussions are slowly taking place about our own ghosts.

Before Uni Carl Vogt was opened in 2015, a letter was addressed to the university authorities by several members of staff requesting an alternative name. This was refused. We were told that this simply referred to its location on the Boulevard Carl-Vogt and that Vogt had been a local scientific figure and first rector of the modern university. The issue of naming was relaunched in June 2019 by members of the university's Feminist Strike Committee (Grève des femmes/Grève féministe). A large hand-painted purple banner was put up to rename the building “Uni Jeanne Hersch”. This referred to the name temporarily assigned to the boulevard as part of the 100Elles* art activist project that aimed to draw attention to the gendered dimension of street naming.

This visual narrative, imagined as a personal letter addressed by the author to Carl Vogt, contributes to these ongoing discussions by focussing on one historical figure who was part of the Swiss and international intellectual history of promoting theories of racial inequality. Carl (Karl) Vogt was an active and enthusiastic participant in the epistemic violence that interpreted socio-scientific data solely to demonstrate the inferiority of some people and the so-called natural superiority of White Europeans. I use this case to reflect visually on the mundane spaces of daily life transformed into places of memory, thinking through the ever-present weight of colonial knowledge and epistemologies within our scientific disciplines, spaces and institutions. In the second part of the comic, I reflect on what happened after the publication of some of its pages, in French, in a daily newspaper. 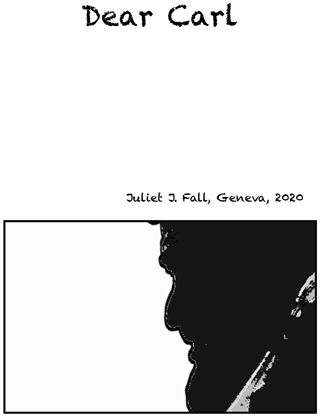 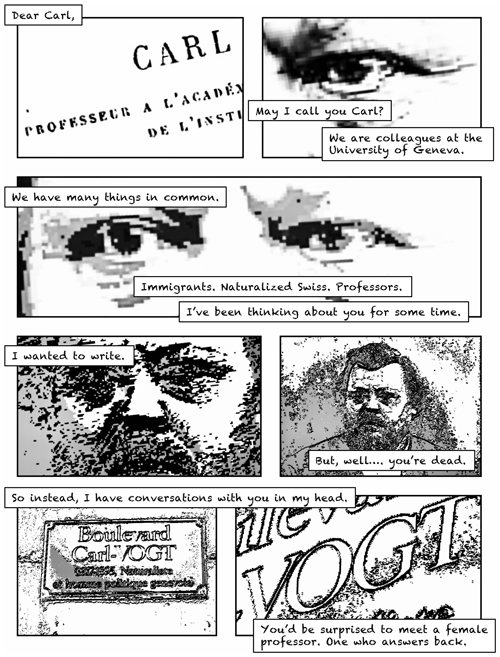 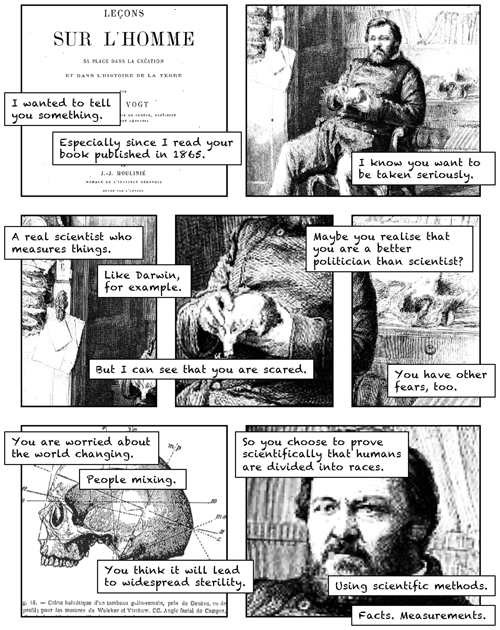 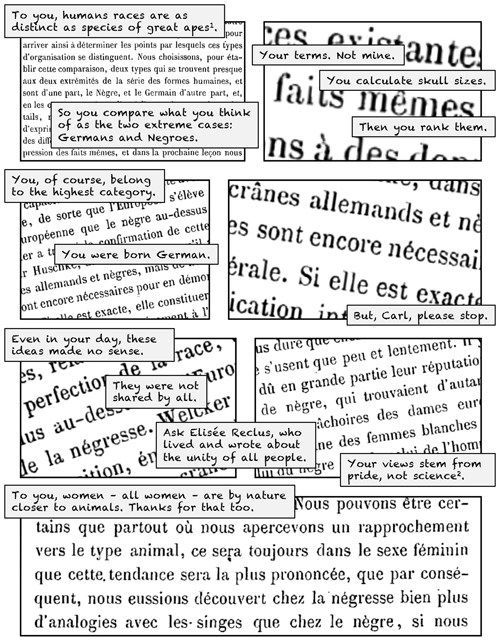 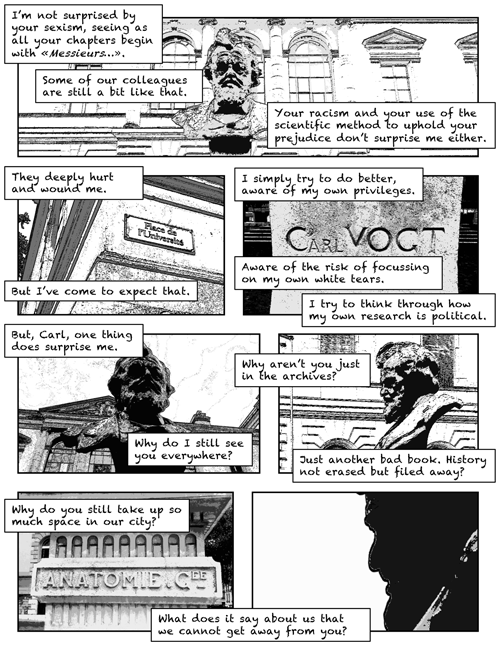 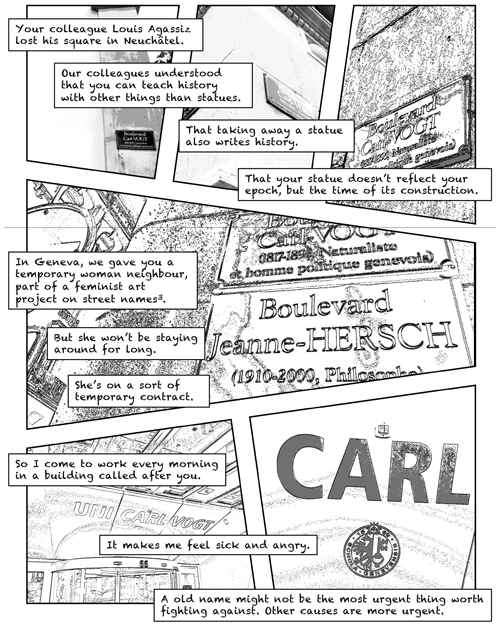 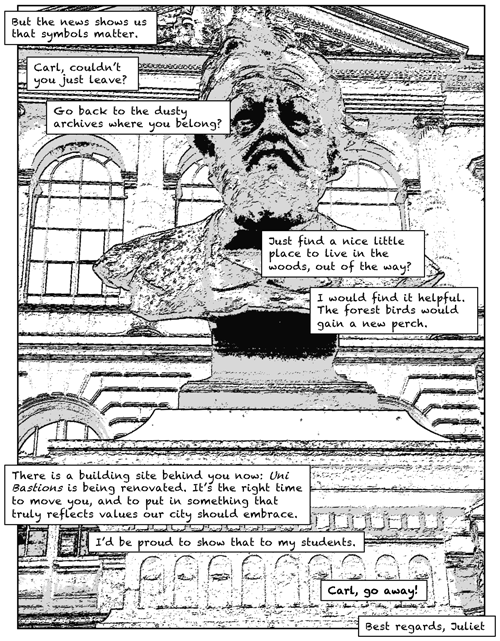 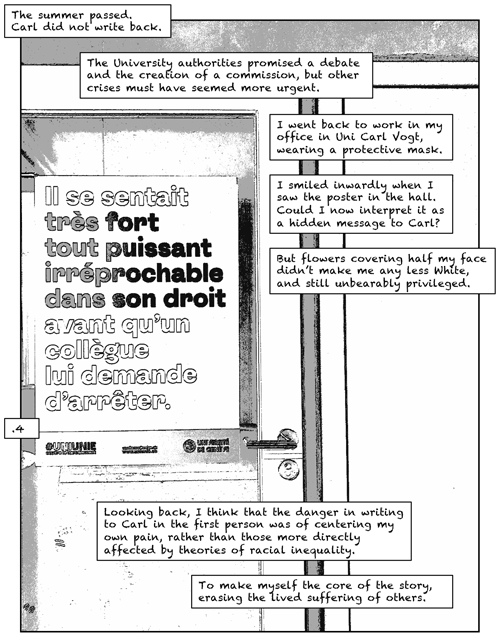 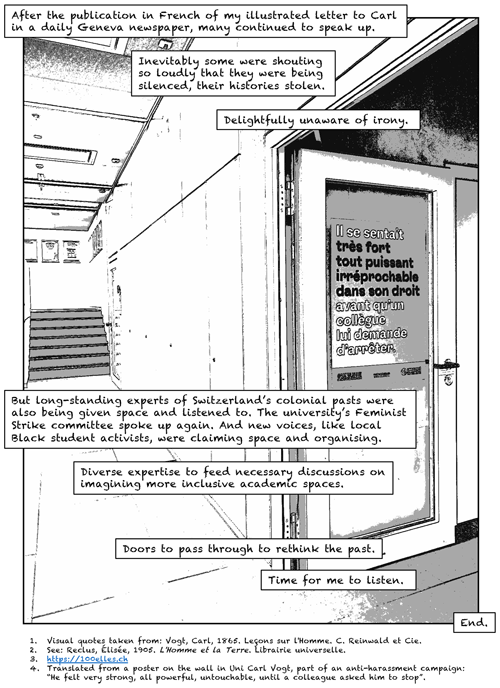 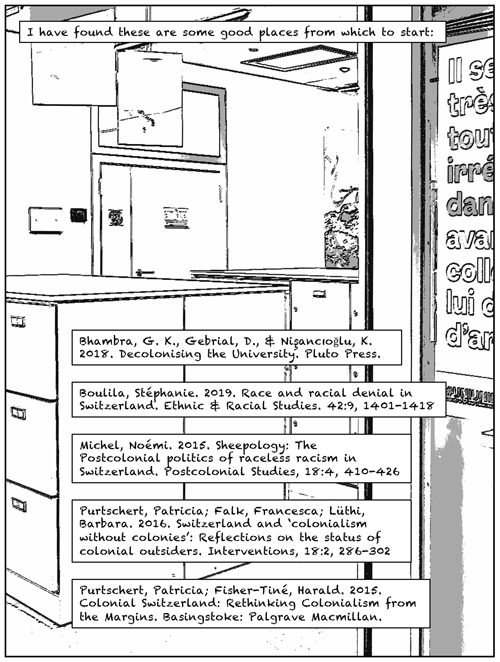 No data sets were used in this article.

The author declares that there is no conflict of interest.

This paper was edited by Benedikt Korf and reviewed by one anonymous referee.